Earlier this month, I took my friend to Budapest for her 21st birthday. Now, this was meant to be a surprise and of course, I accidentally went and told her a week prior to our departure didn’t I?! I’d managed to keep it a secret for 2 whole months and in the last week, it just slipped out. What a bloody wally eh. But anyway…this city had been on The Bucket List for quite some time and I knew that the desire to visit was mutual – so off we went! 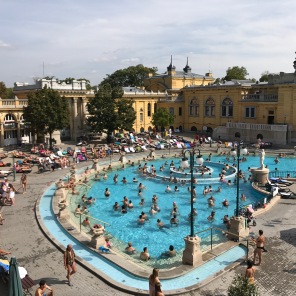 Such a relaxing way to spend our first morning! I booked our tickets online only about a week before we visited. Weekday tickets (for bath access and a locker each) were slightly cheaper (working out at roughly £15 pp) than weekend tickets so I booked us in for the Friday. The weather forecast had looked promising and indeed, the temperature climbed to 25 degrees and it was sunshine and blue skies pretty much all day. It was great to take a dip and lie on a sun lounger doing absolutely nothing for a few hours 🙂

After our morning at the baths, we wandered over to Hősök tere. An UNESCO World Heritage Site and major square in Budapest. There were a number of tourist groups and school trips about but I managed to get a decent enough photo without a single selfie stick in the foreground! (A miracle, I tell thee)

Szimpla Kert is one of the many famous ruin bars in Budapest. It’s extremely popular because it’s a large venue littered with quirky decor. We had a few drinks here on the Friday night and particularly enjoyed the live band that travelled from room to room playing to everyone in the bar.

Though, perhaps the highlight of the night were the cheesy chips I consumed on the walk home, found in a small fast-food shop at the end of the road. Cheesy chips in Budapest?! Couldn’t believe it. Just what I needed after a few drinks!

THE place to go for ice cream and cake in Pest. We stumbled across this shop on our first day, and thank god we did because we returned a number of times during the following 4 days haha. Address: Budapest, Dob u. 20, 1072 Hungary

Immediately, this was filed into my mental list of ‘most beautiful buildings I’ve ever seen’. We visited during the daytime and in the evening and in both settings it looked magnificent. Although, at night time, the whole building is lit up and it certainly creates an eerie but simultaneously breathtaking and majestic ambience.

We saw a show here on the Saturday evening and both the stage and ceiling were surprisingly grand! (The show was good too, despite the fact the singing was entirely in Hungarian and we didn’t understand a word! Haha) 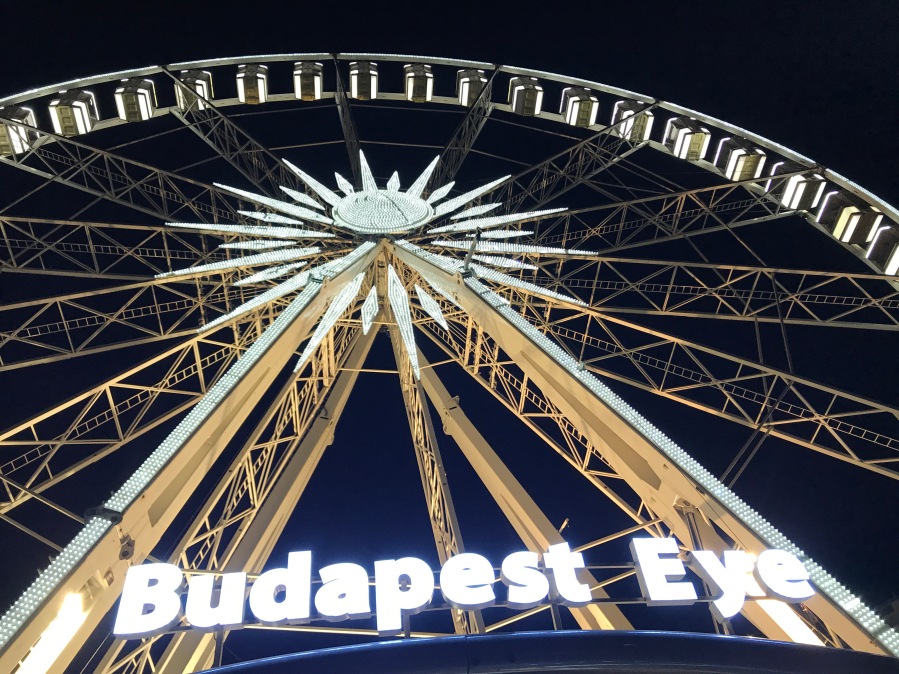 …has nothing on the London Eye, but an inexpensive and enjoyable ride nonetheless!

In my opinion, the best views that we experienced of Budapest at night time were from the 360 Bar – an open-air sky bar on the roof of a building in Pest. Unfortunately, my iPhone camera was not doing the views any justice whatsoever, so you’ll just have to go and see them for yourself! 🙂 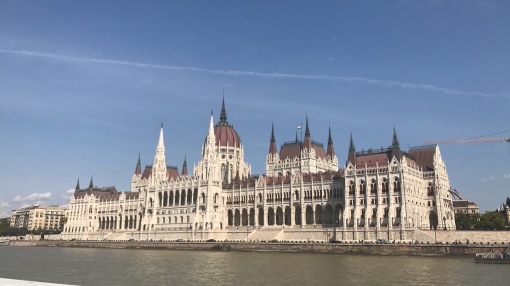 When it comes to cruises of the river Danube, you will not be hard-pressed to find a company wanting you to get on their boat. It took just 2 minutes of walking along the river before we bumped into a river cruise salesman.

Luckily, he happened to have a good pitch and the price worked out at roughly £8 each for a one hour cruise of the Danube (which we didn’t think was too bad) so we purchased tickets and jumped on-board. The cruise was pleasant, although I think it would have been stunning at night-time when the city lights glisten on the water. 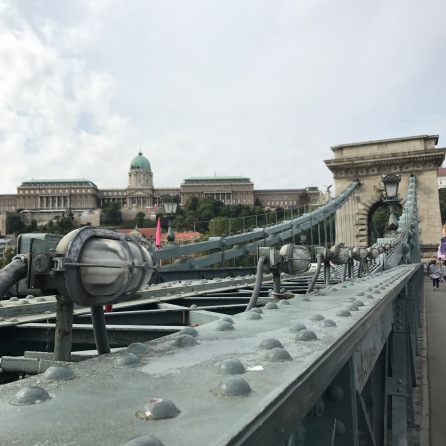 The renowned bridge connecting Buda and Pest across the Danube river and designed by British engineer William Tierney Clark.

We visited Buda on the Saturday and our first stop was Buda Castle. We climbed the hill (in place of taking the funicular) only to find that we’d visited during a wine festival and entrance was only permitted to ticket holders. Typical. However, it was no big loss because Matthias Church and the Fisherman’s Bastion were just a short walk away. 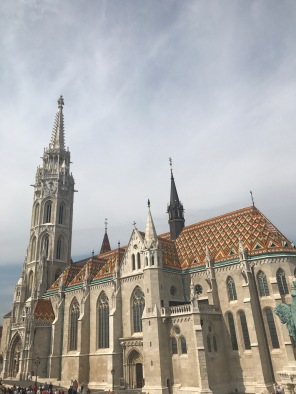 Pretty spectacular. There were tours available to climb the bell tower if you so wished. 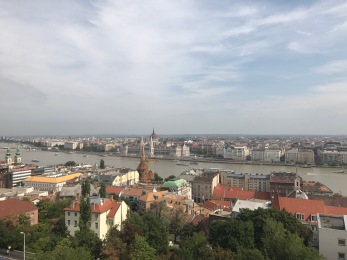 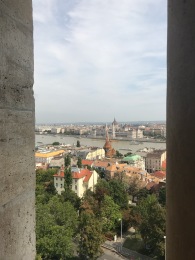 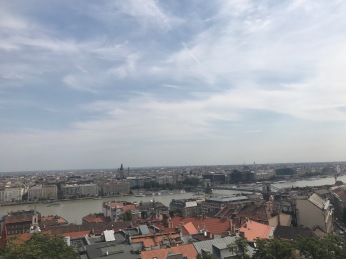 I read online that on some days access to the Bastion is free of charge. However, on the day we visited, you had to pay. I can’t remember exactly how much it was, but it was definitely less than £10 each and quite reasonable. The bastion provides pretty great views of Matthias Church and out over the Danube river to Pest. We visited during the day but again, I expect the best views are at night time as the whole city lights up.

So what surprised us about Budapest?? 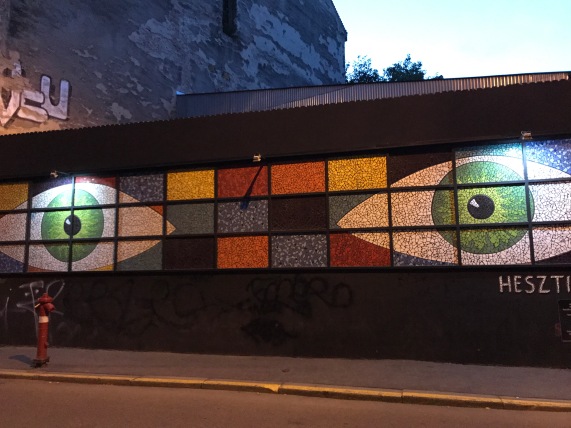 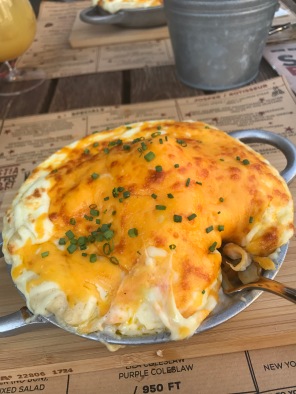 Overall, a fantastic trip. If I were to visit again though, I would go with a larger group of friends and really experience what Budapest’s nightlife has to offer! 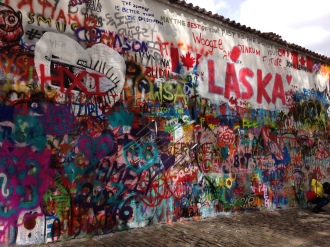 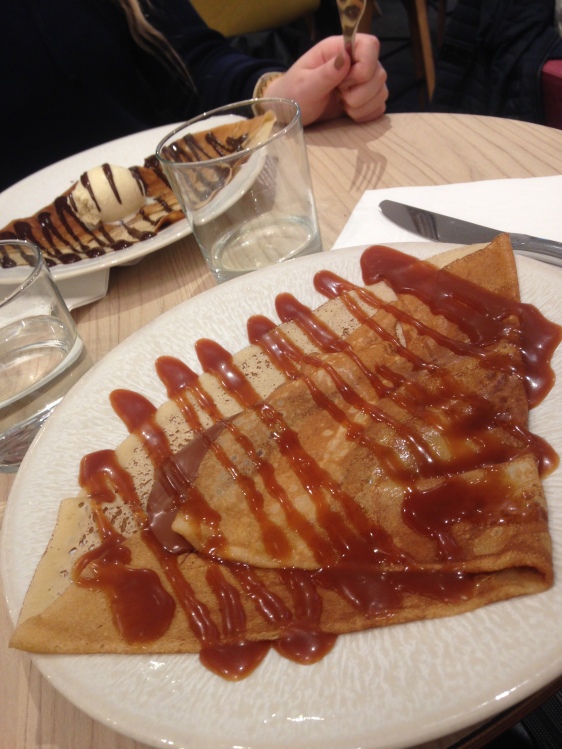 2 of many, many crepes 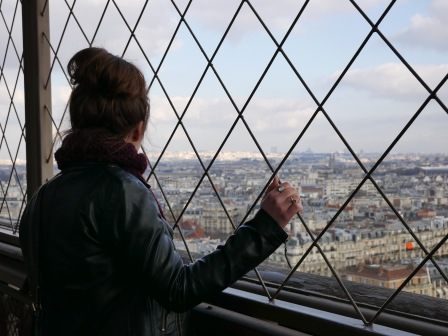 Not posing at all…?! 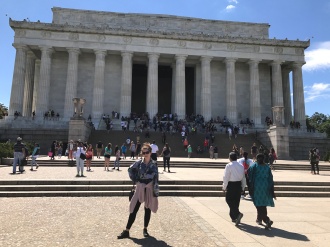 I was actually sweating profusely due to my ill-thought out wardrobe choices in 32 degree heat:) 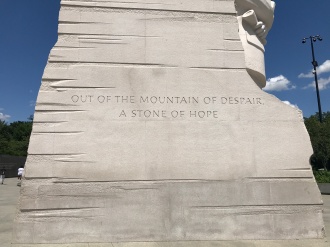 ‘Out of the mountain of despair, a stone of hope’ 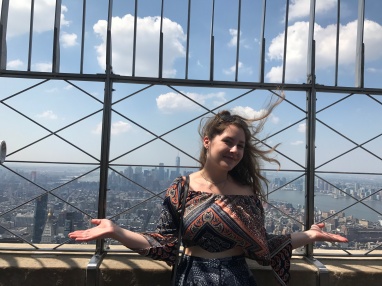 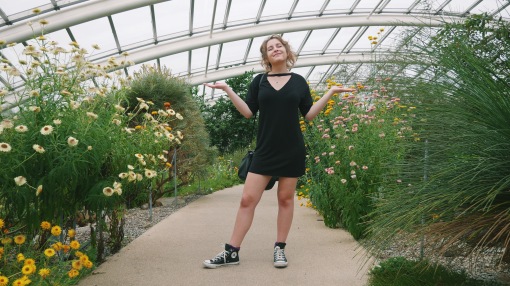 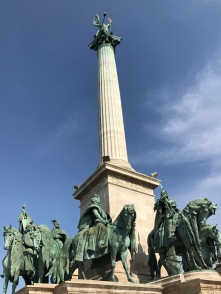 My shot, served in a shot glass made completely of ice…blooming freezing! 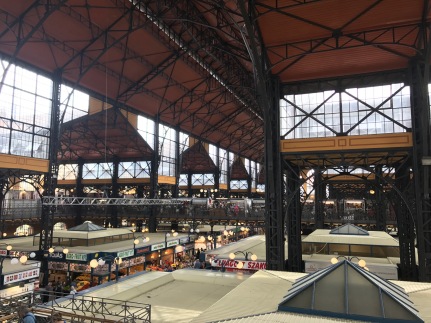 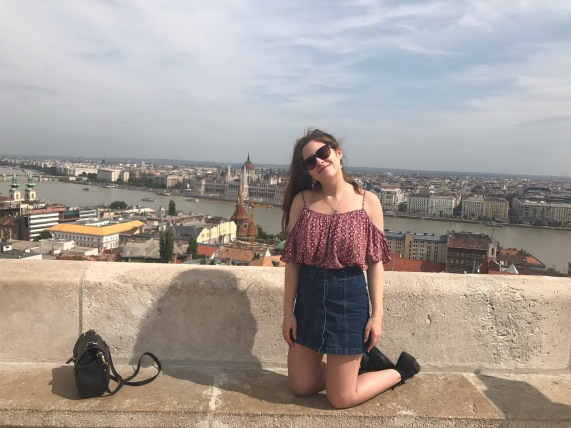 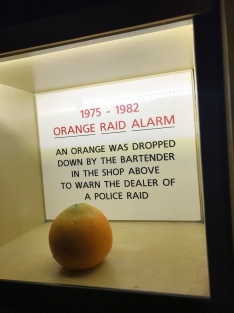 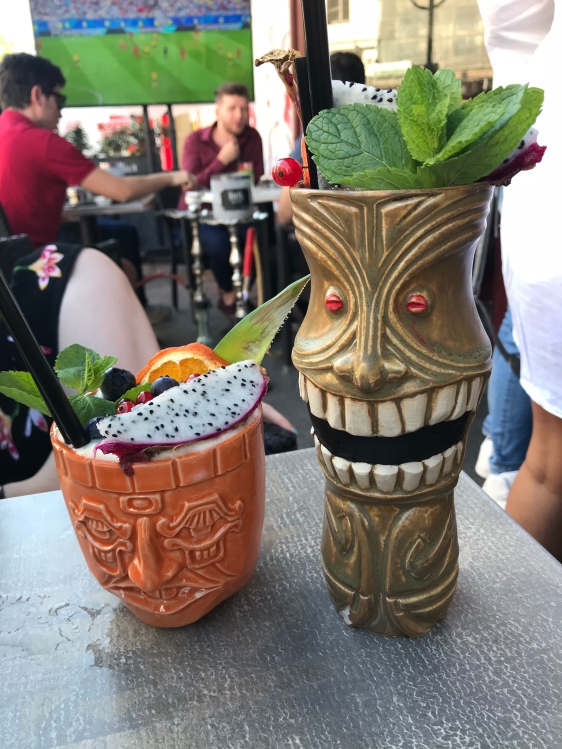 Did someone say cocktails?! 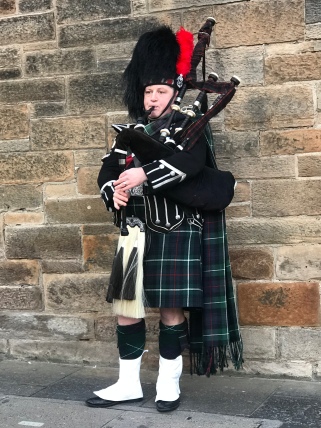 A Scotsman playing the bagpipes! 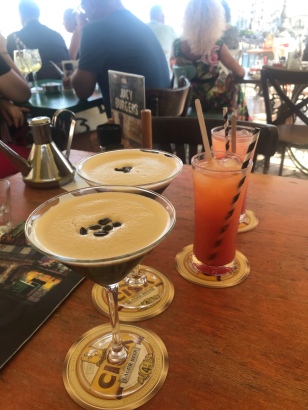 We actually had no idea it was happy hour, so when 4 cocktails arrived in place of 2, we were surprised but didn’t complain! 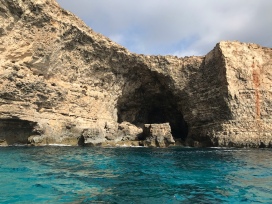 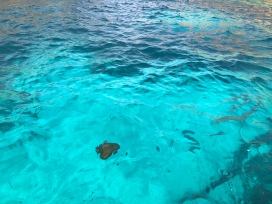 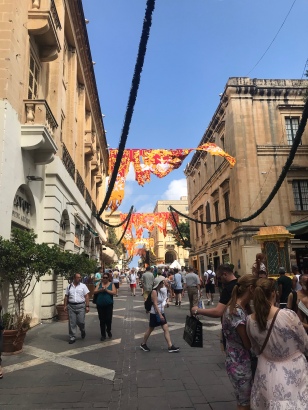 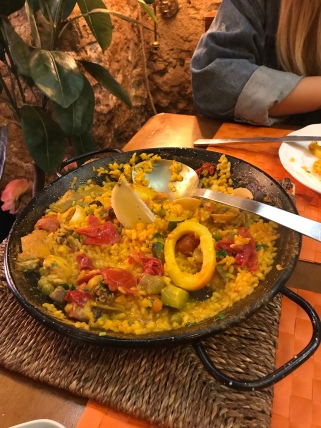 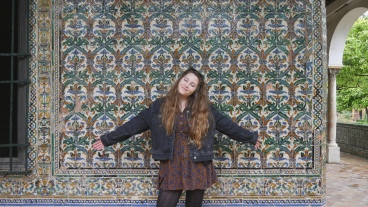 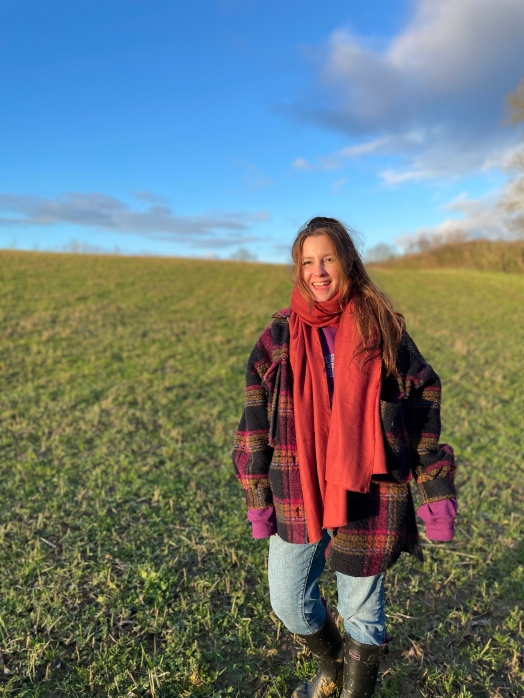